Welcome to the Mummy Blog!

Why mummies? What can we learn about ancient people from well-preserved human remains? Why should we care? Come explore the world of mummies and all their spin-offs (museum exhibits, movies, books....)

The University of Illinois Roman-period Egyptian mummy at the Spurlock Museum has undergone two sets of CT scans twenty years apart. In 1990, an interdisciplinary team was convened to investigate the mummy before it went on display. Since autopsy was not permitted, we concentrated on non-destructive imaging supplemented by materials analyses of tiny bits of hardened resin, cloth, and insects from the damaged lower end of the mummy. 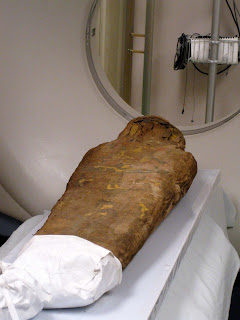 The initial results showed that the mummy was a child (because of dental development and open growth plates) with a broken head and a collapsed chest. CT images showed some kind of packing material (cloth or mud?) around the limbs and a wooden, so-called "stiffening" board under the body inside the linen wrappings. The insects turned out to be flesh-eating beetles, implying that the child’s body was partially decayed before it was wrapped up.
The brain, heart, and lungs appeared to be still in place inside the mummy, but as our consulting radiologist Dr. Joe Barkmeier at Carle Foundation Hospital in Urbana, IL, commented, “they’re all dried up and moved around.”

Lack of evisceration and a concentration on the exterior decoration instead of tissue preservation are features of many Roman period mummies. So is the wooden board underneath the body, inside the wrappings. Sex could not be determined because the pelvic region was obscured by layers of tissues and wrappings and sexing a young child based upon skeletal remains alone is difficult in the best of circumstances.

In 2011, we decided to re-scan the mummy with vastly improved imaging technology and computer software. David Hunt, Physical Anthropology Collections Manager at the Smithsonian’s NMNH, was a consultant on the new project.

Internal organs, packing, and bone fractures are much more visible from the new CT scans. Dr. Hunt was able to age the mummy child more precisely to about 8.5 years at the time of death by identifying key molars and tooth positions in the jaw. 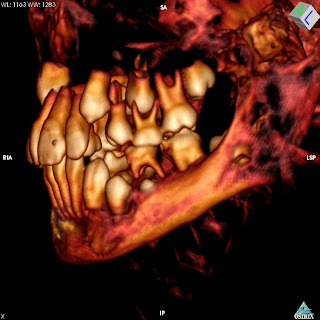 However, the measurements of the long bones of the legs came up a bit short, suggesting that the child suffered a period of malnutrition. Unfortunately, sex is still unknown because the pelvis is collapsed and the similar densities of bone, tissue, and wrappings make accurate observations problematic.

In the thoracic cavity, desiccated organs lie up against the spine, which shows signs of compression fractures (probably post-mortem). The occipital fracture is more severe than we originally thought, and a piece of the skull was pushed inside the cranial cavity. Some brain tissue is clearly visible, but it is possible that the embalmers attempted to take out the brain through the back of the head instead of through the sinus at the back of the nose.

New images show that the embalmers used wads of cloth rather than mud or plant material to pad the thin little body and make it appear more life-like. A recent pigment analysis by the Getty Conservation Institute confirms that the red colorant on the stucco surface is lead oxide, or minium, from Rio Tinto, Spain, and that it matches that of nine other “red shroud,” Roman-period mummies published the new book Herakleides:A Portrait Mummy from Roman Egypt by Lorelei Corcoran and Marie Svoboda. This finding confirms our conclusion that the Spurlock mummy child came from a well-to-do family in Roman Egypt that could afford expensive ingredients such as the red pigment and gold leaf seen on the mummy wrappings.

At Dr. Hunt’s request, Joe Mullins of the National Center for Missing and Exploited Children used the new CT scans to digitally reconstruct the child’s head and face. The result shows that the mummy child was of West Asian or Mediterranean heritage, just as one might expect from the mixed population living in the Fayum region of Egypt at that time.

This mummy is also the star of a mystery, Bound for Eternity, by Sarah Wisseman.

Posted by Sarah Wisseman at 3:50 PM

The University of Illinois Roman-period Egyptian mummy at the Spurlock Museum has undergone two sets of CT scans twenty years apart. In 19...

Sarah Wisseman
Sarah Wisseman is a retired professional archaeologist, mystery writer, and painter. She has worked as a researcher and teacher for over thirty years at the University of Illinois. www.sarahwisseman.com